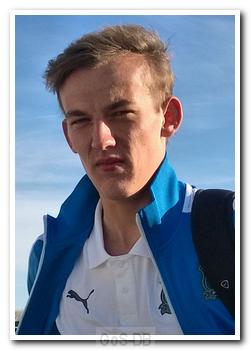 Born in Truro but bought up in Wadebridge, Walton began his career in football as a 10-year-old in Argyle's academy, progressing through the age ranges to the youth team and reserves. In November 2011 he made the first team as an unused substitute, just three days after his 16th birthday, in a home FA Cup tie against Stourbridge. As a highly rated 17-year-old, he left the club 15 months later to join Brighton & Hove Albion on a three-year deal for a nominal fee, and completed his scholarship with the Sussex side.

Having progressed well at the AMEX Stadium, Brighton rewarded Walton with a new four-year contract in July 2014. He made his first team debut for the Seagulls shortly after, aged 18, in a League Cup match against Tottenham Hotspur at White Hart Lane in October 2014. His Championship debut came the following a week when he delivered a clean sheet in a home win over Wigan. Two more first team appearances followed that season, including an impressive clean sheet away at Middlesbrough at the end of the campaign. In July 2015 Walton signed for League One Bury on a season-long loan deal, although this amounted to just four further Football League appearances before an underlying groin problem forced his return to Brighton in September. Whilst at Bury he was named as a member of England's under-21 squad for two upcoming matches, but his injury forced his withdrawal.

Walton had won international honours prior to his under-21 call-up. His first cap came for the under-19s in a friendly against Turkey in March 2014, and three more under-19 honours followed. His first under-20 call-up was for the first fixture of the 201415 season, a friendly against Romania, and he went on to win eight caps at this level, including a return to Home Park in March 2015 (albeit as an unused substitute) as England beat the USA 2-1 in front of a healthy 11,406. Incidentally, that match also featured another former Argyle youth product, Jack Stephens.

Walton returned to Home Park in November 2015 on a short-term loan deal, signed by Derek Adams as stand-in for Luke McCormick after a groin strain had ended Luke's run of 74 consecutive starts. After Walton's four appearances for the club, during a time when the side's form dipped due to multiple injuries, Luke McCormick returned to the side and Walton then saw out his loan spell from the bench before returning to Brighton after Argyle's 2-0 'away' win over Carlisle at Blackburn's Ewood Park on January 2nd 2016.

In the 2016-17 season he was loaned to Argyle's League Two rivals Luton Town, for whom he made 33 appearances, but his loan spell came to an end in January 2017 when he was recalled to the AMEX following an injury to Brighton's back-up stopper.

In July 2017 Walton joined up with Wigan Athletic of League One on a season-long loan deal, meaning the possibility of at least one more return to Home Park.