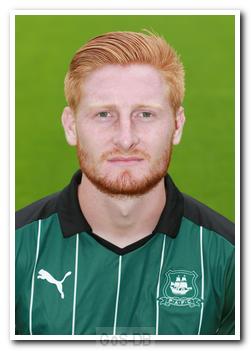 From the other side of the Tamar in Torpoint, Rooney first joined Argyle at the age of nine. He attended Torpoint Community College and played for south-east Cornwall schools at both primary and secondary levels. He made his debut for the Pilgrims under-18s in the Football League Youth Alliance whilst still a schoolboy and made his international debut for the Northern Ireland under-19s against Switzerland in March 2014. Rooney was top goalscorer for the highly successful Argyle under-18 side of 2014-15, and was rewarded with his first professional contract the following summer.

Rooney spent 23 games of his first senior season on the bench, until his chance came on the final day of the standard fixtures. He started in a surprise seven-change line-up ahead of the League Two play-offs, and delighted home supporters with two goals in a 5-0 win over Hartlepool United - his first a spectacular effort from outside the box - with fellow prospect Tyler Harvey also grabbing a brace.

That summer Rooney agreed a new 12-month contract and was also rewarded with two under-21 caps for Northern Ireland. However, first-team chances were limited and he moved on loan to local National League South side Truro City in September 2016, scoring three times in nine games before returning to Home Park due to a hamstring injury.

After three more substitute appearances at Home Park, which included the FA Cup 3rd replay with Liverpool, Rooney then became one of the country's last to move in January 2017's transfer window when he signed for League Two rivals Hartlepool United until the end of the season - a deal that went through just 17 seconds before the window closed. His spell at Hartlepool resulted in seven appearances and no goals, and on his return to Home Park at the end of the season he was not offered a new contract.

In August 2017 Rooney signed for Northern Ireland Football League Premiership Champions, Linfield, on a 12-month contract. His debut was a match to remember: he scored three goals in ten minutes in a 6-0 victory over Lisburn Distillery after coming on as a second-half substitute.

Greens on Screen is run as a service to fellow supporters, in all good faith, without commercial or private gain.  I have no wish to abuse copyright regulations and apologise unreservedly if this occurs. If you own any of the material used on this site, and object to its inclusion, please get in touch using the 'Contact Us' button at the top of each page. Search facility powered by JRank Search Engine.Milonic UK time at page load: 24 January 2021, 06:58.