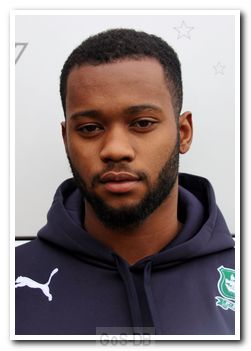 Born in Sidcup in south-east London, Zak is the son of former professional footballer Andy Ansah, who played 180 times for Southend in the 1990s. Zak began his football journey when he was ten, joining Arsenal's Academy at Hale End, the Gunners' facility for nine to 16-year-olds, and by the age of 14 he was playing for the club's under-18 side. In May 2011, having just turned 17, the pacey striker signed his first professional contract at the Emirates and 19 months later was rewarded with a place on Arsenal's bench for their Champions League clash at Olympiacos.

Having represented England at under-16 and under-17 levels, Ansah was called into Ghana's under-20 squad for the 2013 Under-20 World Cup. At the end of the 2013-14 season he was released by Arsenal, and having developed a 'super-talent' reputation during his academy years, he was quickly snapped up by Charlton Athletic on a two-year deal in June 2014.

With the fourth tier play-offs a real possibility, Argyle signed Ansah on loan in March 2015, the day after a similar deal for Gethin Jones from Everton. One familiar face was there to greet him when he arrived at Home Park: his Charlton team-mate Tareiq Holmes-Dennis, who was also on loan until the end of the 2014-15 season. At the end of the campaign, after the League Two play-off semi-final against Wycombe Wanderers ended in defeat, Ansah returned to his parent club.

Shortly after the start of the 2015-16 season Ansah moved to League Two side Newport County under their new manager Terry Butcher on a one-month loan deal.

Greens on Screen is run as a service to fellow supporters, in all good faith, without commercial or private gain.  I have no wish to abuse copyright regulations and apologise unreservedly if this occurs. If you own any of the material used on this site, and object to its inclusion, please get in touch using the 'Contact Us' button at the top of each page. Search facility powered by JRank Search Engine.Milonic UK time at page load: 21 January 2021, 08:20.