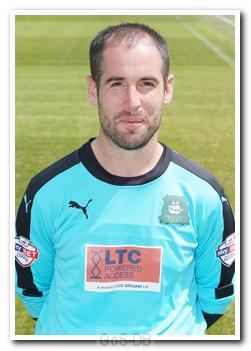 Born in Devizes in Wiltshire, goalkeeper Bittner became John Sheridan's seventh summer signing of 2014 to provide experienced back-up for Luke McCormick after Jake Cole's release at the end of the previous season. With McCormick electing to retain the number 23 jersey he had worn throughout his Home Park career, Bittner was assigned the vacant number one shirt, even though he was recruited with cover in mind.

Starting his career as a junior with Salisbury City in 2001, Bittner then had a brief spell as a non-contract player with AFC Bournemouth, but did not make a first team appearance. He made his professional debut in 2003 with Exeter City and went on to play 45 times in two seasons for the Grecians. Whilst at St James Park he was also called up for the England National Game XI squad. He then had a brief non-contract spell with Torquay United in 2005-06, without making a first team appearance, before moving to Woking for the 2006-07 season, where he played 12 times. In the summer of 2007 he returned to his first club, Salisbury City, and played 85 times over the following three seasons, and then in June 2010 he moved to Forest Green Rovers, where he stayed for two seasons, playing 65 times.

In July 2012 Bittner moved to Hereford United, playing 34 times, before a brief spell with Newport County for whom he signed in July 2013 on a one-month contract after injury problems for the two goalkeepers at the newly reinstated Football League club. He then returned to Salisbury City for a third spell in September 2013 in a player-coach role and also added a further six appearances. Bittner left Salisbury at the end of the 2013-2014 season after the club was demoted from the Conference National division following its failures to pay creditors.

Having moved to Argyle on a one-year contract it was announced that Bittner would also be involved with the Argyle Community Trust, working on a number of initiatives including the post-16 Argyle Scholarship programme, coaching the Marjon Men's team and running goalkeeping clinics.

After an injury to Luke McCormick in a home match against Morecambe in January 2015 - and having only previously played in the Conference National - Bittner came on as a half-time substitute to make a belated Football League debut, just nine days short of his 33rd birthday.

Out of contract at the end of the 2014-15 season, Bittner was offered new terms when the club's Released List was issued by John Sheridan. After a period of consideration and with new manager Derek Adams at Home Park, Bittner accepted terms for the 2015-16 season as back-up to Luke McCormick, and, as well as continuing his youth coaching activities, he was also given an extended remit to cover the release of part-time goalkeeping coach, Rhys Wilmot.

His brief League appearance as a substitute against Morecambe in the 2014-15 season turned out not to be a one-off. In November 2015, following a groin strain for Luke McCormick that ended his own run of 74 starts, Bittner finally made the team sheet for the away win at York, to some national media interest. Several articles ran about the life of a journeyman second/third choice 'keeper and reported his wait of 4,991 days (13 years, 7 months & 29 days, otherwise translated as 86 bench placings and 713 weeks) as a career understudy before finally getting a Football League start.

Bittner's time at Home Park came to an end in the summer of 2016 when the 34-year-old joined Newport County in a familiar role: as reserve 'keeper and goalkeeping coach.

Greens on Screen is run as a service to fellow supporters, in all good faith, without commercial or private gain.  I have no wish to abuse copyright regulations and apologise unreservedly if this occurs. If you own any of the material used on this site, and object to its inclusion, please get in touch using the 'Contact Us' button at the top of each page. Search facility powered by JRank Search Engine.Milonic UK time at page load: 21 January 2021, 07:33.