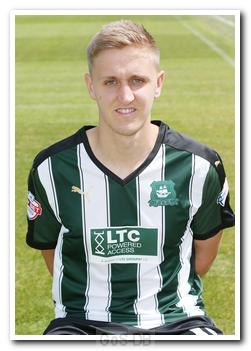 A former St Boniface College student, the Plymouth-born centre-back represented Plymouth Schools at under-11 and under-15 levels, and was spotted by Argyle as a 14-year-old playing for Tamerton Foliot. Bentley starred and scored in the club's FA Youth Cup run of 2013-14, including the magnificent third round display at Premier League Aston Villa, which the Argyle youngsters narrowly lost 4-3. He signed his first professional contract with Argyle in May 2014, along with River Allen (as well as following similar development paths and signing their first professional terms on the same day, Bentley and Allen were born just a day apart).

Bentley made his senior debut as a substitute, three minutes into added time in the Johnstone's Paint Trophy second round win against Swindon Town in October 2014. In his third league start for the club, a home match against Oxford United in December 2014, he was shown a straight red-card for a youthfully impetuous two-footed lunge in the 33rd minute, with Argyle leading 1-0. A clearly tearful Bentley was led distraught from the pitch by team-mates and Argyle failed to hold on with ten men, losing 2-1. A combination of serving his three-match suspension and other players returning from injury meant that he then found it difficult to break back into the team and had to be content with bench places. To help his progress, he was loaned to Conference National side Alfreton Town in February 2015, the Derbyshire club having been managed by former Pilgrim Nicky Law since 2007.

Under new Argyle manager Derek Adams, Bentley found his chances limited to just one appearance on the bench as a non-playing substitute. With one eye on his contract expiry at the end of the season, 'Rodders' was released in the January 2016 transfer window to allow him to pursue his footballing career elsewhere. A month later he followed an oft-trodden path to sign for National League South side Truro City until the end of the 2015-16 season.

Having played 27 times for Truro, in June 2017 Aaron joined ambitious South West Peninsula League Premier side Plymouth Parkway as they sought promotion to the Western League for 2018-19.