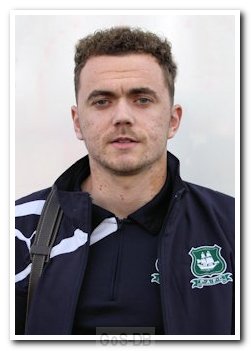 Born in Catford in south-east London, Parsons graduated through the Crystal Palace Academy and signed his first professional contract in April 2010. He went on to make his Palace debut as a substitute in a League Cup tie at Portsmouth in August 2010, replacing Edgar Davids, and made his Football League debut in January 2011 in a home game against Norwich City. Shortly after, he was sent out on loan to further his development at League Two Barnet, for whom he played eight times in the final months of the 2010-11 season.

Returning to Selhurst Park, he played four further league games in the 2011-12 season and twice in cup competitions. At the start of the 2012-13 season he was loaned to Wycombe Wanderers - again in League Two - where he made four league appearances.

Originally a target for John Sheridan in the summer of 2013, Parsons was blighted by a kidney infection which hospitalised him, leading to Sheridan turning to targets elsewhere. However, wanting competition for places as the 2013-14 season progressed, Sheridan returned to ensure it was a case of next stop, Parsons' Green, when the left-back moved to Home Park on a permanent contract until the end of the season, one week after Palace team-mate Jason Banton returned to Home Park, also on a permanent deal. In a scenario indicative of the modern football era, neither signing was a great surprise; both Parsons and Banton had been exchanging less than subtle messages on social media in the weeks prior to their moves. How times change!

It was perhaps no surprise that he failed to score in ten Argyle appearances when you consider Parsons had never managed a goal in league football prior to his arrival at Home Park. A strong performance in Argyle's 0-4 away win at Fleetwood in February 2014 - including a long range effort which crashed off the cross-bar - showed glimpses of real promise. However, he struggled to shake off a persistent thigh problem and was not offered a new deal by John Sheridan. After leaving Argyle, he had trials at League Two rivals AFC Wimbledon and Ryman Premier League Leatherhead, before dropping down to the Conference South with brief stays at Boreham Wood, Eastbourne Borough and then Maidenhead United.