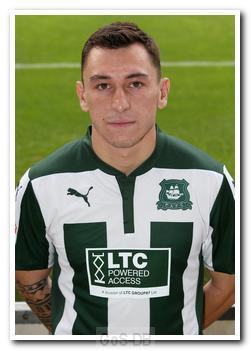 Came from: Sunderland   Went to: Motherwell

Born in Ingelby Barwick in Stockton-on-Tees on the edge of North Yorkshire, Thomas joined Argyle on Christmas Eve 2013 in time to join the squad for the Boxing Day fixture at Oxford United. A left-footed, quick and direct winger who could play on either flank, he was on the books of Newcastle United as a schoolboy but moved to Sunderland when he was 14 and signed apprenticeship terms in the spring of 2011. He made three appearances at under-18 level for the Black Cats in 2010-11 while still at school, scoring once. Highly-rated, he was offered a new contract by Sunderland in the summer of 2013, but he declined it in order to pursue first team football and was released from the Stadium of Light.

Thomas then had trials at several Premiership and Championship sides and turned out briefly for Darlington (1883) FC in the Evo-Stik First Division North  a club for whom he had a previous loan spell in 2012-13. With Argyle finding it hard to attract players, his desire to travel the length of the country and drop down the divisions to seek regular first team football impressed John Sheridan. Thomas's confidence in his ability and his performances during a successful trial at Home Park earned him a short-term deal until the end of the 2013-14 season.

He made his debut soon after joining the club - a second-half substitute in a 1-1 draw at AFC Wimbledon in December 2013 - but he was limited to short opportunities as a tactical replacement in most of his time with Argyle. Showing glimpses of attacking flair and despite some game-changing cameos, he was never given a run of games, with some fans finding him frustratingly underutilised as an attacking substitute, even when chasing games. Despite making 24 appearances in green, only four were starts. His only goal came as a substitute against Hartlepool United early in the 2014-15 season, grabbing the second in a 2-0 home victory. Shortly afterwards, a rare start in a Johnstone's Paint Trophy win over Swindon Town was curtailed after just 34 minutes when he had to be substituted after suffering an asthma attack.

Thomas left Home Park on the last day of the January 2015 transfer window to join Scottish Premier League side Motherwell (captained by former Pilgrim, Keith Lasley) on a deal until the end of the season, with the club having the option to extend for a further year. However, having made just two appearances for the Fir Park side, he spent the latter stages of the season back south of the border, on trial at League Two Mansfield Town, ahead of signing for them for the 2015-16 season. However, after 21 appearances and a single goal for the Stags he handed in a transfer request and returned to his native North East, joining Hartlepool United in the January 2016 transfer window.

He went on to score 14 times in 56 games across two seasons for Pools, and was warmly acknowledged by Argyle fans whenever the teams met. Following Hartlepool's relegation from the Football League on the last day of the 2016-17 season, Thomas's burgeoning reputation earned him a move to newly-promoted Championship side, Sheffield United, on a three-year deal.