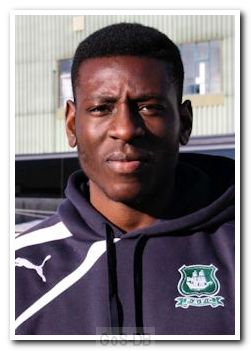 A tall, pacy forward who could also play as a wide-man, Obadeyi joined Argyle on a two-month loan from fellow League Two strugglers Bury in November 2013. Born in Birmingham, he started his youth career with Coventry City before continuing his development at Bolton Wanderers from 2006. He continued to progress and was given his Premiership debut by Wanderers' manager and former Argyle player Gary Megson, in the derby match against Wigan Athletic in December 2008. By this time he had also netted an impressive five goals in just four appearances for the England under-19s (he was an England age-group contemporary of Daniel Sturridge, also a schoolboy team mate, Andy Carroll and Argyle loanee Scott Sinclair). Following that Premier League debut, he went on to make two further appearances for Bolton, away at Arsenal and at home to Manchester United - all three games ending in narrow 1-0 defeats.

In 2009 Obadeyi played twice and scored once for the England under-20 side, and in August of the same year he was loaned to Swindon Town, for whom he scored his first Football League goal later that month. His loan was extended twice to take Town up to the 93-day emergency loan limit, within which he had played 12 times and scored twice. In January 2010 he was loaned out again, this time to Rochdale for the remainder of the season, where he made 11 appearances and scored once. At the start of the 2010-11 season he was loaned to Shrewsbury Town, playing nine times but failing to score, and then, back at Bolton, he signed a one-year contract extension the following summer.

In November 2011 he was loaned to Chesterfield, where he played under John Sheridan, appearing five times but failing to score. In March 2012 he then returned to Rochdale for a second spell, playing 6 times and scoring once. At the end of that season, and following Bolton's relegation from the Premiership, he was released from the Reebok having made just the three appearances for the top-flight club in his four-year stay.

In June 2012 Obadeyi moved to Portugal to sign for Primeira Liga side Rio Ave, for whom he played 12 times before returning to England a year later to sign for former Argyle manager Kevin Blackwell at Bury. However, despite two substitute league appearances and an outing in the Johnstone's Paint Trophy, Bury's difficult start to the 2013-14 season and Blackwell's departure meant that further chances were hard to come by. By November 2013, with Argyle the lowest goalscorers in League Two and indeed the entire Football League, and having already lost Marvin Morgan for several months due to a shoulder injury, John Sheridan took Obadeyi on loan for a second time, with Bury giving the player permission to play in the FA Cup but not in the league match against them during the loan spell.

Upon completion of his second loan spell at Home Park, Obadeyi returned to Bury but was released by the club at the end of the season. In July 2014 he moved north of the border to sign a three-year deal with Scottish Premier League (SPL) side Kilmarnock. Having scored 12 in 68 appearances across two seasons, he moved to Scottish Championship side Dundee United for the 2016-17 season. However, on the last day of the January 2017 transfer window he signed a short-term contract with Oldham Athletic, reuniting with manager John Sheridan.

In June 2017, after a successful spell back with Sheridan, Obadeyi signed a one-year contract extension at Boundary Park.