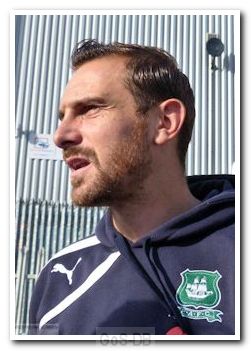 Born in Dagenham, the younger brother of 1980's Arsenal winger Martyn Hayes, Paul played schoolboy football in East London and Essex, which put him in range of Norwich City's scouting network and he duly signed youth terms at Carrow Road in 1999. He turned professional with the Canaries in 2001 but did not make their first team and was signed by Scunthorpe United in 2002. In a three-year stay the attacker played 118 times and scored 34 goals, including 19 in one season to help The Iron win promotion to League One in 2005.

After such a successful season, Hayles controversially left Glandford Park that summer and signed for Barnsley, where he endeared himself to the Tykes' faithful by scoring in the 2006 League One Play-Off Final against Swansea City at the Millennium Stadium - a match in which Rory Fallon netted for the Swans. He also scored in the shoot-out as Barnsley triumphed on penalties after a 2-2 draw. Later in his two-year stay at Oakwell, in which he played 87 times and scored 18 goals, Hayes had a one-month loan spell with Huddersfield Town, playing four times and scoring once.

After he was released by Barnsley, he returned to Scunthorpe United in June 2007 to spend a further three years back at Glanford Park, where he later said his heart was. By the end of his second spell, he had amassed a total of 74 goals in 266 appearances over 6 seasons for The Iron, but when his contract was up in 2010 he opted for a move to Preston North End in the Championship, signing an initial three-year contract. As well as playing 30 times and scoring three for Preston, he returned to Barnsley on loan in October 2010, where he played a further seven times but failed to add a goal to his earlier tally.

Returning to Deepdale his contract was ended early and he moved back south to London to sign for Charlton Athletic in June 2011. He scored three in 19 appearances in 2011-12 but his chances became limited after Charlton had dipped into the transfer market, so he was loaned to Wycombe Wanderers in February 2012. He made an impressive debut, scoring twice in a 5-0 drubbing of Hartlepool and went on to score six goals in six appearances. Upon leaving Charlton he moved to Brentford on a three-year deal in August 2012, and despite making 30 appearances and scoring six goals in his first season at the club, he was loaned to Crawley Town in March 2013, where he scored twice in 11 appearances before returning to Griffin Park.

Hayes arrived at Home Park on a one month loan deal in early October 2013, on the eve of the Devon Derby against Exeter City, bringing a wealth of experience gained over a career record of 464 games and 91 goals. Argyle had not scored in their previous three games and early season optimism was waning, so it seemed an inspired move. Described earlier in his career as a natural goalscorer with a happy knack of being in the right place at the right time, his loan spell did not live up to expectation. He returned to Brentford four weeks later without scoring in any of his seven appearances for the Pilgrims.

Six weeks later, Hayes left Brentford to sign for Scunthorpe for a third time. At the end of that 2013-14 season he was on his way again, this time to another former club, Wycombe Wanderers, for whom he was a near ever-present as the Chairboys battled their way to the League Two play-off final at Wembley. Although his time at Home Park was largely forgettable, Hayes ensured that all Argyle fans would remember him when the 'Law of the Returning Striker' was invoked: he scored the winner in Wycombe's 1-0 win at Home Park in September 2014 and then twisted the knife by scoring the opening goal in each of the play-off semi-final games in May 2015, which Argyle lost 5-3 on aggregate.