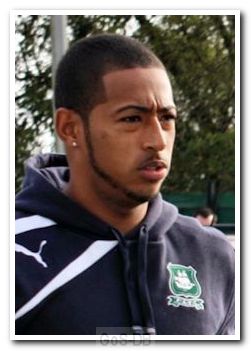 Born in Wolverhampton, Reckord joined his hometown club's academy in December 2001, progressing through the age levels before signing on professional terms in 2010. During his development at the club, the left-back was capped twice at both England U16 and U17 levels. In March 2011 he was loaned to Northampton Town, where he made his Football League debut and played seven times in total. At the start of the following season he made his debut for Wolves in a League Cup match, ironically against Northampton, and six months later he was loaned to Scunthorpe United, where he played 17 times. Another loan was arranged in September 2012, this time with Coventry City, for whom he appeared nine times. Back at Molineux he played his second game for Wolves in August 2013, again in the League Cup, and shortly after became Argyle's alternative 'Reckord signing', arriving at Home Park on a loan deal until January 2014 on the same day that Hamza Bencherif signed - transfer deadline day at the beginning of September.

However, despite starting well, a combination of an ankle injury and loss of form saw him involved less in the loan spell's later stages. He returned Wolves in January 2014 and a fortnight later joined League One Swindon Town on a three-month loan deal.

Having made five appearances for Swindon, he returned to Wolves but was not retained at the end of the season.

In October 2014, Reckord moved north of the border to sign for Scottish Premiership side Ross County, initially on a short-term deal that was extended in January 2015 to a contract for a further 18 months.