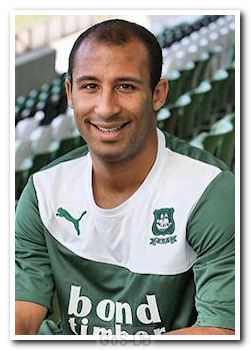 Born in Bernay in northern France, Boco became John Sheridan's sixth summer signing and Argyle's second Benin international (Reda Johnson was the first) when he agreed a one-year deal in July 2013. An attacking midfielder, Boco started his career with French side Chamois Niortais (known more commonly as Niort) and then moved across the Channel to sign for Accrington Stanley. Having helped Stanley to the 2005-06 Conference Premier title, he then scored his side's first two goals when the reincarnated club returned to the Football League. He spent three years at the Crown Ground, playing 73 times and scoring 7 goals, but on his return from the 2008 CAF African Cup of Nations with Benin, he asked for his contract to be terminated.

In February 2008 he moved across the Irish Sea to sign for Sligo Rovers, reuniting with former Stanley team-mate Paul Cook, who had taken charge at the Showgrounds. Boco stayed for two years, accumulating eight goals in 57 appearances, and had an exciting debut season when he helped the Bit o'Red qualify for the Europa League. In the latter stages of 2009 he expressed concern about the financial state of the club and had a trial with Championship side Doncaster Rovers and also Burton Albion before ultimately signing for the latter in February 2010, making eight appearances for the Brewers in the remainder of their League Two campaign.

Boco then returned to Sligo, where he helped the club win the 2010 FAI Ford Cup, playing a further ten times and scoring four after being used more as a forward in this second spell at the club. He then moved China to play for Chinese Super League side Shanghai Dongya (known more commonly as Shanghai East Asia), for whom he played 22 times and scored once. Remarkably, after discussions with Paul Cook, he then returned to Sligo for a third spell in December 2011, going on to play a further 22 times and scoring one more goal for the club.

In August 2012 Boco completed another return, this time to Accrington Stanley, scoring ten times in 42 appearances and becoming a firm fans' favourite during their 2012-13 League Two campaign. When John Sheridan's attempt to secure a second loan spell for Jason Banton was rejected, Argyle announced Boco's arrival, the player having trained with the club during the pre-season. By now an established international, the Frenchman had been capped 48 times (scoring once) by the end of the 2012-13 season, and was firmly established as the national team's captain, earning him the nickname 'The King of Benin'.

Failing to fully establish himself at Argyle, Boco was released at the end of the 2013-14 season. After a trial with new Conference National side Bristol Rovers, he signed for League One Chesterfield on non-contract terms on the eve of the new season. It was the fifth time in his career he had been signed by Paul Cook, who had signed him three times for Sligo Rovers and once for Accrington Stanley (the two were also team-mates at Accrington in the 2005-06 season). Boco scored his only goal for the Spirerites on the opening day of the 2014-15 campaign and continued his world tour in January 2015 by signing for Bharat FC in the Indian I-League.

After 20 appearances for Bharat he returned to the UK to reunite with Paul Cook yet again by signing for League Two Portsmouth in September 2015. He was immediately loaned to local non-league side Havant & Waterlooville of the National League South to aid with match fitness (playing three times for the Hawks) before returning to Fratton Park to break into the first-team. However, after just four appearances in total he returned north in January 2016 to sign for Accrington Stanley for a third time.