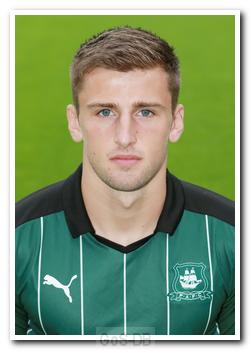 Born in Exeter and nephew of Richard Hill, a member of England's 2003 Rugby World Cup winning side, Purrington joined Argyle's development centre in Devon's second city in 2005 at the age of nine. Despite breaking a leg in November 2011, he began a two-year apprenticeship at Home Park the following summer and frequently impressed at left-back in the under-18 side. His reward came only one year into his scholarship: a professional contract on his 17th birthday and a place in the first team squad.

After featuring in some of the first team's pre-season games ahead of the 2013-14 campaign, Purrington continued to perform steadily for the under-18s, featuring in the run to the FA Youth Cup third round where the team lost 4-3 to Premiership side Aston Villa's youth equivalents - a game in which he scored at Villa Park. His first team debut came at second-placed side Oxford United on Boxing Day 2013, playing the full 90 minutes and posting an impressive performance to help Argyle win 3-2, the club's first victory at the Kassam Stadium.

Purrington scored his only goal for the club in his fourth appearance, an FA Cup third Round draw at Port Vale in January 2014. He was 17 years and 230 days old, making him the club's sixth youngest goalscorer at the time.

Having established himself for a period under John Sheridan, he then featured more as an understudy for the next two seasons, with his occasional appearances including the League Two play-off semi-final against Portsmouth in May 2016 when he came on as a substitute. An injury to Gary Sawyer then promoted him back for a first-team stint under Derek Adams in the 2016-17 season, culminating in two accomplished performances against Liverpool in the FA Cup, in which the club came under the national spotlight. On 30th January 2017, just before the transfer window shut and with his contract up at the end of the season, he moved to Rotherham United in the Championship for an undisclosed fee, signing a three-and-a-half year contract with the South Yorkshire side.

Footnote: A week before Ben's move to Rotherham, his brother Tom (an under-16 academy player and also a full-back) accepted the offer of an apprenticeship a Home Park.

Greens on Screen is run as a service to fellow supporters, in all good faith, without commercial or private gain.  I have no wish to abuse copyright regulations and apologise unreservedly if this occurs. If you own any of the material used on this site, and object to its inclusion, please get in touch using the 'Contact Us' button at the top of each page. Search facility powered by JRank Search Engine.Milonic UK time at page load: 21 January 2021, 07:29.