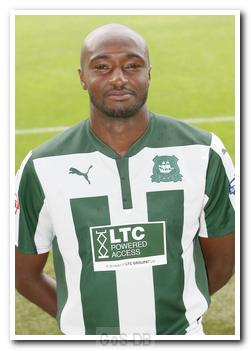 Born in Manchester, the tall striker came late to the professional game. Starting as a youth with Wealdstone, he graduated to their first team in 2000 and became a regular over the next four years, making a total of 51 appearances and scoring 29 goals. Whilst with The Stones he also had two loan spells with Berkhamsted Town. In November 2004 he moved to Yeading for £3,000 and netted seven goals that season to help The 'Ding win the Isthmian League Premier Division. The following season, 2006-07, he scored 25 times to finish as the club's leading scorer. In total he scored 59 goals in 121 games in all competitions for Yeading, before moving to Conference National side Woking in May 2007, for whom he scored 20 goals in 42 games in the 2007-08 season.

Morgan finally got his chance in the professional game at the age of 25 when he signed for newly-promoted Aldershot Town in the summer of 2008, following their phoenix-like revival. Whilst the transfer fee was recorded as 'undisclosed', it was believed to have been a record outlay for The Shots. In a three-year stay with the Hampshire side, where future Argyle assistant Gary Owers was assistant manager, Morgan scored 25 times in 93 games and finished the 2009-10 season as top scorer with 16 goals. However, he then befell a fate as much indicative of the modern game as it is of modern society; after a defeat at Hereford in January 2011 he used a social media website to publically criticise Aldershot fans who had booed him, and was duly transfer-listed. He was loaned to Dagenham & Redbridge for the remainder of the 2010-11 campaign, playing 12 games but failing to score and at the end of the season was released by Aldershot.

Morgan signed for Shrewsbury Town in the summer of 2011 and made his debut in the first match of the season, a 1-1 draw against Argyle at the New Meadow - a game remembered by the Green Army for Carl Fletcher's late thunderbolt equaliser. By the end of that season he had scored 11 goals to help The Shrews win promotion to League One. The following year he scored just 7 goals to take his tally to 15 in 82 appearances for the Shropshire side and was released at the end of the season.

Morgan moved to Home Park in July 2013 as a free agent, having scored an impressive 40 goals in 107 Football League appearances since his rise up the ladder, and signed a two-year contract under John Sheridan to also reunite with Gary Owers.

He was used sparingly by Sheridan in his time at the club, with over half of his appearances coming from the bench. In January 2015 Hartlepool United's manager Ronnie Moore travelled all the way to Home Park to watch him play in a Development League game, in which Morgan scored both goals. He had made only five first team starts in the 2014-15 season and none since October, with his only goal coming against, ironically, Hartlepool, albeit before Moore's tenure began. After much speculation it came as no surprise on the last day of the January 2015 transfer window when Morgan joined Hartlepool United on loan until the end of the season.

At that stage Hartlepool were well adrift at the bottom of the Football League, but they hauled themselves out of trouble by the end of the season, albeit with little help from Morgan - he made just five appearances for the County Durham side and played no part in the run-in. On his return in May 2015, Sheridan decided not to offer the 32-year-old a new contract and he left the club.

In July 2015 Morgan signed for National League South side Havant & Waterlooville on a two-year deal. He spent the latter part of 2015-16 on loan to Wealdstone and then joined Bath City in July 2016 on a season-long loan.