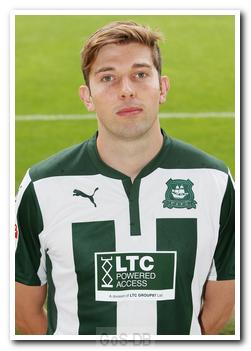 Born in High Wycombe, Blizzard arrived rather unseasonably during the summer of June 2013, as part of John Sheridan's rebuilding for his first full season in charge.

A product of Watford's youth system, the midfielder signed his first professional contract in April 2002 and made 29 appearances for the Hornets over the following five years. In September 2005 he contracted a virus that laid him low for over a year, although he did return to the bench in April 2006 in a goalkeeper's kit, a position he enjoyed as a child, because of an injury to Watford's second-choice number one. In 2007, having not made the first team since the virus struck, he was sent out on loan to Stockport County (seven appearances), and then to MK Dons (8 appearances) for the remainder of the 2006-07 season.

His career took a further twist when was offered a permanent contract with MK Dons in May 2007, but after a change of manager over the summer the offer was withdrawn in the August, amid reports of a falling out with new boss Paul Ince over his pre-season form. Within days he signed for his first loan club, Stockport County, as a free agent (playing 58 times and scoring four). In 2009 he moved on to Bristol Rovers on a free transfer (39 appearances, one goal) and in March 2011 he had a spell on loan with Port Vale, reuniting with his former manager from Stockport County, Jim Gannon. Blizzard's loan spell at Vale Park was restricted to just a single appearance before Gannon was dismissed, and he returned to the Memorial Stadium within a matter of days before ultimately leaving by mutual consent at the end of the season.

In July 2011 Blizzard moved to Yeovil Town on an initial one-season deal which was later extended by a further year. In all he made 54 appearances and scored 4 goals for the Glovers, helping them secure promotion to the Championship for the first time in the club's history. After release from Huish Park at the end of the 2012-2013 season, he joined Argyle in June 2013 on a two-year deal.

The tall midfielder was sidelined by a virus for two months after his first few weeks with the club, and although he won his place back, found himself plagued by minor injuries and spells of indifferent form throughout his time at Home Park. At the end of the 2014-15 season, manager John Sheridan chose not to renew Blizzard's contract and he left the club.