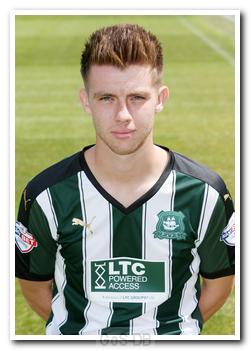 Plymouth-born Harvey joined Argyle in 2004, signing Centre of Excellence forms at the age of nine. He was a student of Ivybridge Community College and also played for Plymouth schools. A striker, he signed as an apprentice at Home Park in 2011 and his impressive performances and goalscoring record for the under-18s led to his promotion to the first team squad early in the 2012-13 season. This form also led to interest from Premier League clubs, but in October 2012 he agreed to sign as a professional with Argyle at the end of his apprenticeship.

Used mainly as an impact substitute across the following three seasons, Harvey clocked up over a half-century of games for Argyle, although only ten were starts. His debut goal, a late Boxing Day equaliser against Torquay United in 2012, was memorable as was his sublime free-kick in an early-August win at home to Exeter City in the 2014-15 season. Increasingly used as an attacking midfielder under John Sheridan, he had a brief, fruitless trial at Nottingham Forest in December 2014, and the following summer he accepted a new one-year deal after new manager Derek Adams' arrival at Home Park.

Without a start since November 2014, Harvey moved to National League South side Bath City in March 2016 on a 28-day loan, linking up with former Argyle coach Gary Owers, the manager at Twerton Park. His four goals in six appearances included a Beckham-esque strike from the centre-circle that later won him the National Game Awards goal of the season trophy. With two man-of-the-match awards, Bath hoped for a loan extension until the end of the season but the 20-year-old returned to Home Park to rejoin the promotion push with five League Two games remaining.

Harvey's chance came on the final day of the standard fixtures. He started in a surprise seven-change line-up ahead of the League Two play-offs, and delighted home supporters with two goals in a 5-0 win over Hartlepool United, with fellow prospect Louis Rooney also grabbing a brace. But he was back on the bench for the play-off matches, including the disappointing final at Wembley, and despite the offer of a new contract he decided that it was time to seek opportunities elsewhere.

Harvey signed for National League team Wrexham AFC in July 2016 but failed to settle. As a result, he was loaned again to Bath City in November 2016, making a further three appearances without scoring. Having begun talks with the Twerton Park side about making his move permanent, he elected to sign for National League South rivals Truro City in January 2017.

Harvey spent the following pre-season on trial at Exeter City, with fellow-ex-pilgrim Ryan Brunt, but in August 2017 he once again signed for Truro City.