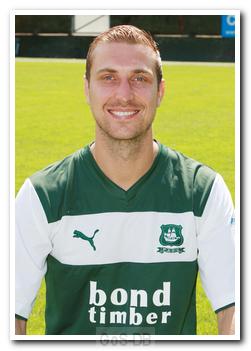 Born in Cardiff in 1980, Griffiths spent his entire career in the League of Wales and Welsh Premier League before joining Argyle in August 2012. He began his career in 2001 with Cwmbran Town before moving to Haverfordwest County. He returned to Cwmbran for the 2002-03 campaign before a second spell with Haverfordwest the next year.

In July 2004 Griffiths signed for Carmarthen Town but moved on to Port Talbot Town just a few months later. The following season he scored 28 league goals for the Steelmen, finished as top scorer in the Welsh Premier League and was selected for the Wales semi-professional side. This form led to a move to Llanelli in 2006 and over the next six years he scored 180 goals in 181 league games for the club, winning the golden boot as top scorer in each season. His goals helped Llanelli win the league title for the first time in 2007-08, a campaign in which they also won the Welsh League Cup.

A tall, physical striker, Griffiths was voted into the Premier League team of the season on six occasions and in December 2006 was linked with a transfer to Wrexham, but chose to remain semi-pro at Llanelli. In 2011 he was named player of the season by the league managers. He returned to Port Talbot Town in July 2012 but shortly afterwards joined Argyle on trial. After scoring the winning goal in a friendly at Truro City and impressing whilst training with the squad, he was offered a contract and chose to take a career break from his occupation as a fireman in order to turn professional at the age of 32.

Griffiths scored on his debut as a substitute in a 3-2 win against Northampton Town before breaking down with injury in the same game. A goal in a 41 win at Barnet in October made it three in his first five league appearances for Argyle, but he failed to add to his tally. After 17 appearances the Welshman was considered surplus to requirements by new manager John Sheridan. His contract was cancelled by mutual consent in January 2013 and he went back to his roots the following month to join a Newport County side battling to return to the Football League after a 25-year absence. Griffiths failed to score in ten appearances but the Exiles did seal promotion to League Two from the Conference via the play-offs.

Despite this success, Griffiths' contract with Newport County was again cancelled by mutual consent and he linked up for a third time with Port Talbot Town in July 2013, just twelve months after leaving to join Argyle. In March of the following year, the prolific striker set a new Welsh Premier League goalscoring record with seven goals in the Steelmens 8-2 derby romp at Afan Lido.

Griffiths spent two season with Port Talbot, amassing 48 appearances and 25 goals, before moving to Aberystwyth Town for the 2015-16 season (21 games and 7 goals). Then in May 2016, the seven-time Welsh Premier League Golden Boot winner took the step up into management by taking charge at Welsh Football League Division One team Pen-y-Bont FC in Bridgend.