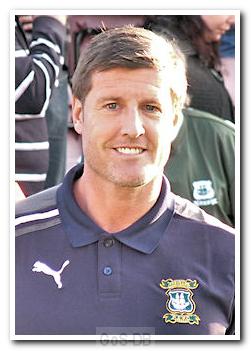 Fletcher was born in Hartlepool in 1972 and began his career with his hometown club. He progressed through the ranks to the first team, making his debut in August 1990, and went on to make 37 first team appearances over the next two years. In July 1992 he moved to Bournemouth for a fee of £30,000, becoming new manager Tony Pulis' first signing for the club. This began a 15-year spell at Dean Court in which he played almost 600 games and scored more than 100 goals.

During his time with the Cherries he helped the club win promotion from the Third Division via the play-offs in 2002-03, scoring in the play-off final at the Millennium Stadium in Cardiff when Bournemouth thrashed Lincoln City 5-2. Two of the Bournemouth goals that day were scored by future Argyle captain / manager and namesake Carl Fletcher, who was a teammate of Steves for seven seasons.

At the end of the 2006-07 season Fletcher was released by Bournemouth and joined Chesterfield. Despite featuring regularly in the first team throughout the subsequent campaign, he turned down a contract extension for family reasons and returned to the south coast, joining non-league Crawley Town. After just eight months and 21 games with Crawley, Fletcher returned to Bournemouth in January 2009 and three months later scored the precious goal that preserved the Cherries' Football League status. In February 2010 he made his 500th league appearance for the club and two months later was honoured when the North Stand at Dean Court was renamed 'The Steve Fletcher Stand'.

Fletcher helped Bournemouth win promotion to League One in 2009-10 and signed a one-year contract extension at the end of the campaign. In January 2011, after manager Eddie Howe left the club, he was appointed as player-assistant manager to new boss Lee Bradbury. However, he resigned this position in November of that year, stating that he wanted to focus on playing for the remainder of his contract. With his first team opportunities mainly restricted to substitute appearances, Fletcher was allowed to leave Bournemouth to join Argyle on loan for the final eight matches of the 2011-12 season. This reunited him with former team-mate Carl Fletcher, Steve insisting that he would not have left Dean Court for any other club, but was eager to help out his close friend as Argyle strived to avoid relegation.

When Argyle secured their Football League status against Morecambe, Fletcher was recalled to Dean Court and played in the final match of the season against Preston North End. He then announced his intention to see out the final year of his contract with Bournemouth before retiring. It proved quite a finale as Eddie Howes side won promotion to the Championship with Fletcher ending his Cherries career with 121 goals in 728 games over 18 years.

After calling time on his playing career at the age of 41, Fletcher took over as Head of Recruitment, scouting upcoming opposition and potential transfer targets for Howe's ambitious team. He also became AFC Bournemouths first ever ambassador in a community role that connects the people of Dorset with their thriving local team. In March 2014 Fletcher was honoured by the Football League in recognition of his 24-year career in senior football with the inaugural Sir Tom Finney Award (previously known as the Credit to the Game Award).