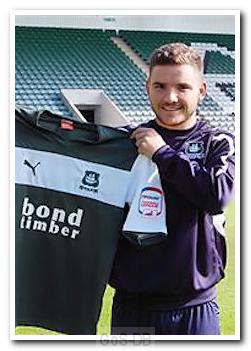 1. Came from: Burnley   Went to: Burnley

2. Came from: Burnley   Went to: Burnley

MacDonald was born in Chester in 1990 but qualifies to play for Scotland through his father and has been capped at youth and under-21 level by his adopted country. He began his career with Burnley in 2006 and, after being named the youth team player of the year in 2007-08, was rewarded with a professional contract having already made his first team debut in the final home game of the season against Cardiff City.

During the following campaign he struggled to break into the team, making just six appearances as a substitute, and his opportunities became even more limited after Burnley were promoted to the Premier League in May 2009. In July of that year he moved on loan to Falkirk for six months but failed to score in any of his 13 games. After returning to Turf Moor he suffered a hernia injury which saw him miss the remainder of the season.

Again unable to break in the starting XI during the 2010-11 campaign, MacDonald joined Inverness Caledonian Thistle on loan in January 2011 and scored once in 11 games for the club. However, he still finished as top scorer for Burnley reserves and was rewarded with a new contract in May 2011. An impressive pre-season saw MacDonald return to the first team reckoning at the start of the 2011-12 season and he made seven appearances before joining Argyle on an initial short-term loan deal in January 2012. Three goals in his first three games, and some impressive performances, saw the loan extended until the end of the campaign.

At the beginning of the following season, MacDonald made one brief substitute appearance in the Championship for Burnley before starting for them in the League Cup tie against Argyle. It was after this game that talks took place which resulted in him returning to Home Park on loan for a second spell. This arrangement was extended a few weeks later, with MacDonald suggesting he would welcome a permanent move when the transfer window re-opened.

However, in December 2012 he returned to Burnley, and after Carl Fletcher was dismissed from the Home Park hot-seat, MacDonald was loaned to League Two side Burton Albion in January 2013, initially on an one-month loan that was extended until the end of the season. He scored once in 17 games in his loan spell with the Brewers, and was then released by Burnley at the end of the 2012-13 season, having made just two starts in his 17 appearances in five years at Turf Moor. A few weeks later he returned to Burton, this time on a two-year contract, and went on to play a further 66 games for Albion, scoring six goals - including the obligatory goal against Argyle in a 1-1 draw at the Pirelli Stadium in November 2014.

In February 2015 MacDonald joined Oxford United on a two-and-a-half-year contract. Two years later, having clocked up 12 goals in 97 appearances, including a promotion to League One, he moved to Mansfield Town in League Two during the January 2017 transfer window.

Greens on Screen is run as a service to fellow supporters, in all good faith, without commercial or private gain.  I have no wish to abuse copyright regulations and apologise unreservedly if this occurs. If you own any of the material used on this site, and object to its inclusion, please get in touch using the 'Contact Us' button at the top of each page. Search facility powered by JRank Search Engine.Milonic UK time at page load: 21 January 2021, 08:27.