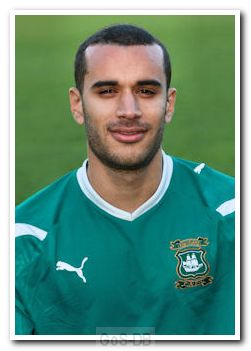 Bignot joined Argyle on loan from Blackpool in November 2011. A right-back, he began his career as a trainee with Crewe Alexandra, progressing through the youth ranks to the first team and made his senior debut at the age of 18 against Sunderland in August 2004. He made only occasional first team appearances over the next two seasons and in October 2006 had a spell on loan at Kidderminster Harriers. Despite featuring regularly in the starting XI on his return to Gresty Road, Bignot turned down a contract offer in order to seek regular first team football.

In July 2007 he re-joined Harriers and became first-choice full-back during the following season. However, he fell out of favour early in the 2008-09 campaign and had a spell on loan with Newport County. Eventually his contract was cancelled by mutual consent and he made a permanent move to Newport, who won the Conference South title in his first full season with the club. The next season saw Bignot named as County's player of the year and he also won an England C cap. This form led to speculation linking him with a number of League clubs, including Leicester City. He finally moved to Blackpool on a two-year contract, for an undisclosed fee, after impressing Ian Holloway in a pre-season trial.

Bignot became the first player to join Argyle after the club came out of administration, and therefore the first signed by Carl Fletcher. He arrived in early November 2011 on a three-month loan deal that was later extended until the end of the season, but he'll unfortunately be remembered for a reckless moment just a few weeks later when he received a straight red card for impetuous retaliation in the defeat at non-league Stourbridge in the FA Cup, a moment that for many crowned one of the low points in Argyle's history.

At the end of his loan he returned to Blackpool, but played no part in the Seasiders' 2012-13 campaign and was released at the end of that season. That summer he signed a one-year deal with Grimsby Town, later extended for a second season, but was released by the Lincolnshire side in May 2015.

In July 2015 Bignot signed for Icelandic side Keflavik on a three-month deal, making nine appearances. This caused him problems on his return to the UK as the FA would not let him sign for a Football League club until January because he was registered to Keflavik in the August. In October 2015 he instead signed for Solihull Moors in National League North, which was managed by his brother, Marcus Bignot.

Bignot joined Newport County for a second spell in July 2016 when he was signed by Warren Feeney on a one-year deal.