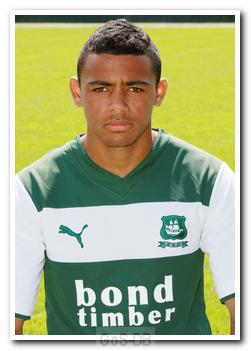 Born in Newquay, Vassell was a product of the Argyle development centres at Newquay, St. Austell and Bodmin, progressing to the Centre of Excellence in 2005. The nephew of former Aston Villa and England striker Darius Vassell, he played representative football for West Cornwall under-15s and Cornwall under-16s. He was promoted to Argyle's first team squad at the beginning of the 2011-12 campaign, making his debut as a 17-year-old substitute against Shrewsbury Town in the first game of the season. Vassell went on to make a total of eight appearances during the season, all coming from the bench, and also spent two months on a work experience loan at Truro City from March 2012, where he played six times in the Conference South. He signed his first professional contract, a six-month deal, in the summer of 2012.

in August 2012 Vassell went to Bideford on loan for three months and at the beginning of 2013 he signed a one-month contract extension to allow a new manager to consider his future. John Sheridan saw his potential and extended his contract until the end of the season, and although Vassell didn't even make a first team match squad in 2012-13, the manager showed faith by granting him a new 12-month contract in the summer of 2013, believing that the 19-year-old had pace and ability but lacked confidence and self-belief, and that another year's coaching and experience would be of great benefit.

But is wasn't to be. Whilst Vassell clocked up another appearance early in the following season - an 88th minute substitute in the League Cup in August 2013 - it was one of only five times that earned a place on the bench that season. Quite surprisingly then, following the end of Tope Obadeyi's first loan spell, Vassell was given a place in the starting line-up for the FA Cup third round replay against Port Vale at Home Park in January 2014. It was his only start for the club; two months later he joined Weymouth (along with Jamie Richards) on loan until the end of the season, at which point his contract at Home Park was not renewed and he was released.

Vassell then headed back to Truro City, where, after scoring two goals for them in a 50 friendly victory in July 2014, he signed for the club permanently.

He spent two seasons with Truro, amassing a total of 94 appearances and 28 goals. Despite the City chairman stating publicly in March 2016 that he was worth £1 million to them, Vassell moved back to the Football League in July 2016 with a free transfer to League Two's Luton Town, for whom he made 55 appearances and scored 16 goals.

In August 2017, with one year left on his Luton Town contract, Vassell signed a four-year deal with Birmingham City for an undisclosed fee.