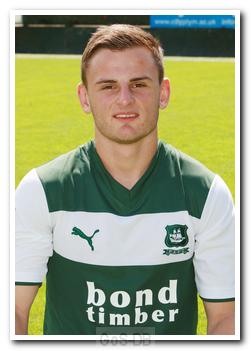 Richards, originally from Essex, was on Southend United's books before he moved to Devon and joined Argyle when he was just nine years old. A former student at South Dartmoor Community College, he has played for Devon Schools and impressed for the Argyle under-18s and reserves whilst still a schoolboy. A versatile defender who can play at either centre-back or left-back, his outstanding displays in the Northern Ireland Milk Cup in 2009 led to speculation that several Premier League clubs were keeping a close watch on him. He was handed a three-year professional contract by Argyle in July 2011, but a broken ankle suffered two months earlier saw him miss the start of the 2011-12 campaign. He joined Barnstaple Town on loan in August 2011, returning to Home Park later in the season to help the under-18 side win the Football League Youth Alliance South-West.

Richards was given his first team debut by Carl Fletcher in October 2012 in a Johnstone's Paint Trophy home win over Aldershot Town, and John Sheridan chose him for his first league game as a substitute in an away draw against AFC Wimbledon four months later. He then found further opportunities harder to come by; his only chance in the following 15 months was another substitute appearance, this time at Southend United in the first game of the 2013-14 season. In June 2014 - with a year of his contract remaining - Richards was loaned to Northern Ireland Football League Premiership side Linfield until the end of the year, reuniting with Warren Feeney, who had taken charge at Windsor Park two months earlier. Richards played 15 times for Linfield, scoring once, and also made his European debut, playing in ties against Faroese side B36 Tórshavn and Swedish Allsvenskan side AIK Stockholm in the 201415 UEFA Europa League.

In December 2015, having returned to Plymouth, Richards was sent out on loan to Conference Premier side Dartford on a one-month loan deal, which was subsequently extended until the end of the 2014-15 season. Richards made 16 appearances for Dartford but could not prevent their relegation from the Conference Premier. The 20-year-old returned to Home Park at the end of the season and featured in the Devon St Lukes' Cup Final before hearing a week later that his contract would not be renewed.