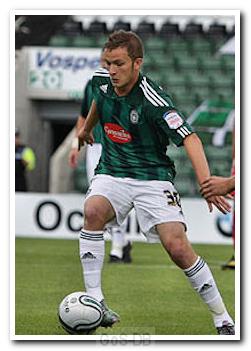 Parrett moved to Home Park in August 2010 on loan from Tottenham Hotspur. After beginning his career in the Queens Park Rangers youth system, he moved to Spurs in 2007, aged just 15, for an initial fee rumoured to be £1million. An England under-16, under-17 and under-19 international, he captained the Tottenham youth team and impressed in his performances for their reserves before making his first team debut in a UEFA Cup tie in February 2009. A box-to-box midfielder and free-kick specialist, he had a brief spell on loan at Aldershot Town in September 2009 and joined Argyle after agreeing a new three-year deal at White Hart Lane. What was supposed to be a season-long loan at Home Park was curtailed after just three months following Parretts dismissal during an FA Cup tie against Swindon Town, which ended a disappointing spell at the club.

After returning to White Hart Lane he was loaned to Charlton Athletic in 2011, playing nine games and scoring once, and had also won three England U20 caps by the end of the year. Parrett then made two appearances for Spurs in the Europa League in 2011-12 before being loaned to Yeovil Town in January 2012 for the remainder of the season. He made ten appearances and scored once for the League One side before moving to Swindon Town for another loan spell in March 2013. The loan spell at the County Ground was terminated abruptly in April 2013 with Swindon's manager unwilling to explain the reason.

Parrett returned to Tottenham and was subsequently released by the club in June 2013. In the following October he signed for Stevenage until the end of the 201314 season, when he then signed a new contract at the club.