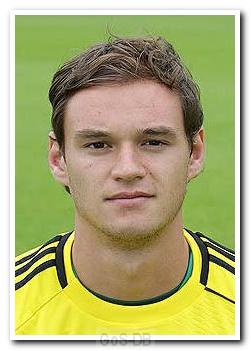 Button was a graduate of the Tottenham Hotspur youth academy and joined Argyle on a season-long loan. Having become a regular in goal for the Spurs reserve side, he had brief spells on loan with Grays Athletic and Rochdale in 2008 before similar moves to Bournemouth, Luton Town and Dagenham & Redbridge the following year. At the start of the 2009-10 season he joined Crewe Alexandra, but was recalled to White Hart Lane due to an injury crisis, making his Spurs debut soon after in a League Cup tie. He returned to Gresty Road less than a fortnight later, but was once again recalled the following month and then joined Shrewsbury Town on loan for the remainder of the season.

Button, an England schoolboy and youth international, moved to Home Park after Peter Reid received a strong recommendation from Harry Redknapp, and he kept Romain Larrieu out of the team for much of the 2010-11 campaign. Returning to White Hart Lane at the end of his season-long loan, he played a single game for Leyton Orient later in 2011 and then seven times for Doncaster Rovers and nine times for Barnsley in 2012. In the summer of 2012, after more than six years as a professional at White Hart Lane and loans to a remarkable 11 clubs, he moved to Charlton Athletic on a free transfer.

After making just six appearances for the south-east London side, he at last found some stability when it was announced in July 2013 that he was joining Brentford on a two-year deal for an undisclosed fee. Button was a virtual ever-present over the following season as the Bees secured automatic promotion to the Championship - he made 45 appearances and kept an impressive 20 clean sheets. Button then signed a new three-year contract in June 2014 to keep him at Griffin Park until the summer of 2017.